Following the Chernobyl nuclear power reactor meltdown in 1986, the Russian government made a significant effort to help its population that was being adversely affected by the extreme radiation exposure resulting from the nuclear facility meltdown.

The Russian government determined to care for the affected people and created teams of scientists who conducted double-blind studies regarding protocols that might help . During these studies, a group of test subjects living in a particular area of Russia were found to be virtually impervious to Chernobyl radiation damage regardless of supplementation protocols (placebo or real). This group, whether they received placebos or real protocols had terrific outcomes that were far better than other study subjects located in other areas. Scientists were assigned to find the reason for this unexpected result... and began looking for something unique to that particular area.

It was finally found that these study subjects were all drinking water from one source... a particular aquifer from which their town received its drinking water. Eventually, after considerable, scientific scrutiny of that water,  it was found that the water was Single File Aligned... a term coined by the scientists to describe water that wasn't clumped or entangled with other water molecules. This clumping  occurs in virtually all other waters on earth, but, in this particular location (spring fed lake), water molecules were not clumped, but were in long-chain, linear structure or “single file” alignment.

This unexpected discovery then spawned an effort to duplicate the Single File Alignment properties of that spring water... and the results of that effort are responsible for the material presented in this website.

By the end of the second decade of life, the human body starts to degrade* and lose its optimal functioning... and especially so, in regard to:

One can either passively accept this natural course... or one can “resist and fight against” nature's decision to “surplus” him or her... by taking actions that will keep life processes functioning at a highest possible efficiency.

*Nature appears to value younger adults more than more older persons  (who are past child-bearing age) and turns off systems that protect DNA integrity . Scientists speculate that this is  because the emphasis of nature is on reproduction. But, for whatever reason, one who is past child-bearing age is, unprotected from aging processes. Many people object to this natural selection choice and seek ACTIVELY to keep biochemistry at peak efficiency through lifestyle disciplines.

Do you want the healthiest possible life?

In 2003, a Nobel Prize was awarded to an American scientist named Peter Agre , who discovered that cells have specific plumbing, which he called aquaporin water channels that allow water molecules to only enter into the cell as single molecules, in single file, in order to deliver nutrients or remove wastes. Previous to this discovery, scientists supposed that water moved into cells through osmosis. Now it is known that 85% or more of intra-cellular water moves through aquaporin channels, which only allow Single File Water to enter.

People dry up as they age. The drier one becomes the less well one’s body functions. We need to be 70+% water in order to function optimally. Sadly, the cells in older people can often be more like stagnant ponds than healthy reservoirs. In fact, older people are often less than 55% water.

A big part of the reason why we dry up as we age is that our bodies become less  capable to move water through cell pores (aqua‑porins)  into our cells. A great solution is to drink Single File Aligned Water,  which water easily passes through aqua-porins without needing any processing by the body!

Drinking Single File Aligned Water is one of the best ways to assure that one’s cells are optimally hydrated, nourished and cleansed.

It's one thing to drink water, and a totally different thing for cells to ”receive” that water.

Hydration, IE, water amply moving through cells, is extremely important to health, yet 75%
of all people are chronically dehydrated, with their cellular water being more like stagnant
ponds than fresh water lakes. The reason for that is that normal drinking water has
its molecules all clumped together. The body must convert clumped water to Single File
Aligned Water before it can enter into cells through aqua-porins (water channels) —
Nobel Prize Discovery 2003 – Dr. Peter Agre. Converting clumped water takes
time and energy... and can be a problem since as the human body ages, it
loses the ability to convert clumped water as efficiently as it once could. 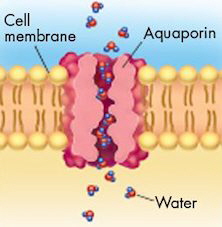 When water goes into cells it carries nutrients with it. Single File Alignment Water helps you get those nutrients into your cells faster and more completely.

Single File Aligned Water can triple the speed at which cells receive nutrients. (See all properties of SFAW)

Single File Aligned (SFA) Water is a great cellular cleanser because it enters the cells so readily — fully hydrating cells. The extra volume of water entering the cells has shown a great ability to help flush, detoxify and clear cells of toxins and pathogenic organisms.

Cellular Hydration (IE, Water Moving Through Cells)
Is Transformationally Important — for Having the Healthiest Possible Life

If Single File Aligned Water Could Save the Lives of People Exposed to Nuclear Fallout... Then Just Think of What It Could Do For You?

Single File Aligned Water (SFAW) is a great health boon for people over the age of 30.

Human babies start life at up to 85% water in a state of optimal biochemical functioning... and then they progressively dehydrate and lose optimal function as they age.

You Were Born Filled with Single File Aligned Water

At birth, the water molecules in one’s cells are aligned in a single-file.  A young body converts any liquid that is drunk into the single-file structure so that it enters through cellular aqua-porins into his or her cells. But, as one ages, the ability of his or her body to convert water into the single-file alignment (SFA) decreases and the body’s hydration levels become more and more diminished.

Seeing is Believing - MRET - IH2O Water Before and After 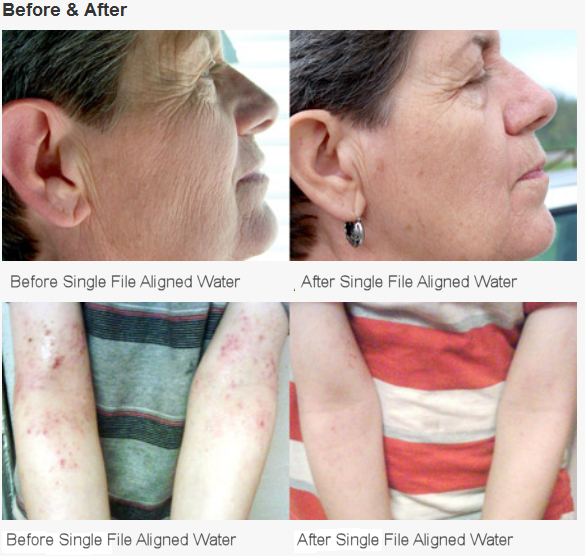 Statements herein have not been evaluated by the Food and Drug  Administration. No product mentioned herein is intended to diagnose,  treat, cure or prevent any disease. The information on this website is intended as a sharing of knowledge and information from the research and experience of the sfileaw.com staff and contributors. It is not intended to replace a one-on-one relationship with a qualified health care professional and it is not intended as medical advice. You should keep in mind that cited references to ongoing scientific study are most likely not accepted by the FDA as conclusive. These references and mentions of benefits others purport to have received have not been vetted, and are disavowed as product claims and are only included for educational value and as starting points for your own research. No particular food, supplement, water, air, light, sound (music), life-style or relationship can be considered safe or desirable for all individuals. Therefore, no one can take responsibility for your health except you in consult with your trusted health professional.